Abbott and Costello were an American comedy duo composed of comedians Bud Abbott and Lou Costello, whose work on radio and in film and television made them

highest-paid entertainers in the world during World War II.

considered one of the best-known comedy routines of all time!!!

The team’s first known radio broadcast was on The Kate Smith Hour on February 3, 1938.[2] At first, the similarities between their voices made it difficult for radio listeners (as opposed to stage audiences) to tell them apart during their rapid-fire repartee. As a result, Costello affected a high-pitched, childish voice. “Who’s on First?” was first performed for a national radio audience the following month.[2] They performed on the program as regulars for two years, while also landing roles in a Broadway revue, The Streets of Paris, in 1939.[4] 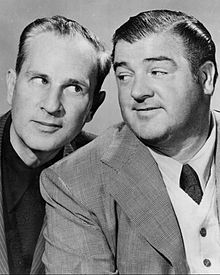 After debuting their own program, The Abbott and Costello Show, as Fred Allen‘s summer replacement in 1940, Abbott and Costello joined Edgar Bergen and Charlie McCarthy on The Chase and Sanborn Hour in 1941. Two of their films (Buck Privates and Hold That Ghost) were adapted for Lux Radio Theater that year. Their program returned in its own weekly time slot starting on October 8, 1942 and Camel cigarettes as sponsor.

In 1947 the show moved to ABC (the former NBC Blue Network). During their time on ABC the duo also hosted a 30-minute children’s radio program (The Abbott and Costello Children’s Show)[5] on Saturday mornings. The program featured child vocalist Anna Mae Slaughter and child announcer Johnny McGovern. It finished its run in 1949.[6]

There are no reviews yet.

Be the first to review “Abbott and Costello Book” Cancel reply